The 22nd Annual PTO Conference – “Breaking the Silence: From Rebellion to Waging Love” – at Cass Commons in Detroit (June 1st-4th) was a resounding success. Nearly 250 participants from 7 countries shared PO and TO techniques, offered clear and demanding critical analysis of each other’s work, and proposed actions to confront oppressions of mind, body, and spirit wherever they occur. 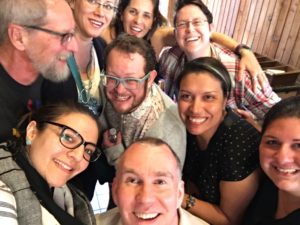 The conference kicked off on Thursday evening with a performance of Forum plays developed by participants in the Julian Boal led preconference. From the get-go it was clear that the silence was broken as a Forum performance about student health support led to powerful discussions about education systems, institutionalized racism, personal responsibility, and disempowering labels. The discussions were passionate, confrontational, and loving – attitudes that characterized most interactions at the conference.

The spirit of the presenters and attendees were buoyed by the spirit of the place. It was a joy to be in historic Cass Commons, the epicenter of social justice movements in decades past – and in the very challenging present. The plenaries challenged attendees to more deeply analyze and contextualize issues in politics, education, and activism while in smaller sessions presenters offered reports on their own work, led discussions to define issues and explore possible actions, shared teaching and theatre techniques, and explored the future of PO, TO, and PTO as an organization. Participants offered considered, demanding, yet loving critiques of the work, and in the final Open Space session raised and confronted issues they felt demanded further exploration.

The Board would like to thank the many volunteers who made the conference possible, the attendees who brought their open minds and open hearts to the gathering, and all the artists, activists, social justice advocates, teachers, students, performers, organizers, and others who generously shared so much in such an important space. As attendee Willa Taylor put it in her Facebook post: “I just spent four days wrapped in the arms of a community of fierce committed warriors who are determined to change the world. I just spent the four days in a city that is devastated by capitalism, disinvestment, neglect and lying government but whose people roll deep and long in collective action, who know their history and their legacy and are teaching a new generation. I just spent four days remembering that things have been worse, that people who have never been included know how to build a movement, and that there is NOTHING better than being with people who believe in social justice. WE WHO BELIEVE IN FREEDOM WILL NOT REST UNTIL IT COMES!”

-2017 Pedagogy and Theatre of the Oppressed Board